Incept is looking to both invest and establish their own Biochar manufacturing capabilities both locally and Internationally and to become a major player and provider of Biochar for both Agriculture (soil amendment) and for fuel replacement / enhancement in industries such as Steel and Power, Concrete and Water. Incept will initially import plantation-sourced wood biochar from South America based on Australian hardwood.

Biochar is charcoal used as a soil amendment for both carbon sequestration and soil health benefits. Biochar is a stable, solid, rich in carbon, and can endure in the soil for thousands of years. Like most charcoal, Biochar is made from biomass via a process called pyrolysis. Biochar is seen as a viable approach for carbon sequestration, as it has the potential to help mitigate global warming and climate change. This results from processes related to pyrogenic carbon capture and storage (CCS).

Biochar is basically a charcoal derived by controlled heating of waste materials, such as agricultural waste, wood waste, forest waste and animal manure. Among all the end uses, it is widely used in soil amendment to reduce pollutants and toxic elements, and to prevent reducing moisture level, soil leeching and fertilizer run off.

Biochar may increase soil fertility of acidic soils (low pH soils), increase agricultural productivity and provide protection against some foliar and soil-borne diseases. Regarding its definition in production, Biochar is defined by the International Biochar Initiative as "The solid material obtained from the thermochemical conversion of biomass in an oxygen-limited environment". 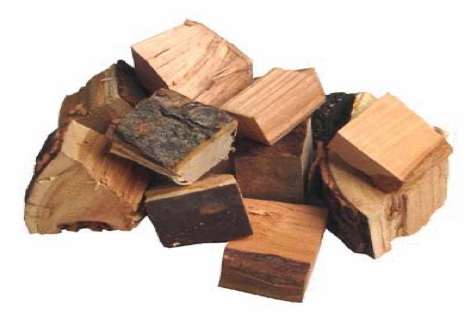 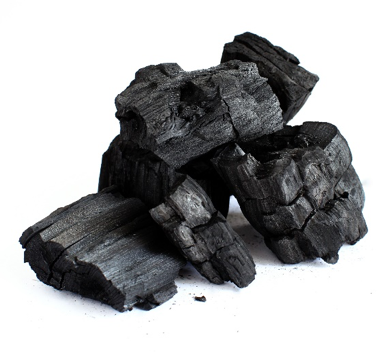 Biochar produced from wood pieces through a process called pyrolysis.

Size of the market

The global Biochar market value was estimated to be USD$1.3 billion in 2018, while demand was estimated at 395.3 kilo tonnes that year growing in double digits per annum thereafter (see reference / link below) With ever increasing knowledge and awareness of Bio Char’s many key benefits, consumption of the product is expected to grow exponentially on a global basis. With an expected influx of new producers and manufacturers of the product, potential end users across many industries will be provided the comfort of product continuity and quality for long term supply agreements. Agricultural use in producing organic food and the products ability to enhance soil fertility and plant growth are expected to be the key future growth drivers. Ref: https://www.grandviewresearch.com/industry-analysis/biochar-market

How is Biochar produced?

Biochar is made from a process called pyrolysis, in which a source material – in this case, a carbon-containing substance such as wood is subject to elevated temperatures in the absence of oxygen, so that it thermally decomposes into char, or carbon-rich solids. The lack of oxygen is key to the process, as introducing too much would oxidize the carbon and cause it to burn away as gaseous products. In pyrolysis, the starting material (or “feedstock”) and processing conditions can be tuned to tailor a carbon-based product for a specific application.

The manufacturing of Biochar contributes to carbon sequestration and provides usable biofuels in addition to the creation of Biochar. Overall, Biochar manufacturing is considered a carbon negative. This means that there is more carbon being removed from the atmosphere than would have been released under normal circumstances. Using pyrolysis, responsibly obtained biomass is processed in a low or no oxygen environment at high temperatures ranging from approximately 400 to 800 degrees Celsius.

The majority of feedstock/biomass used in Biochar manufacturing is obtained from the waste or by-product from farm fields, like corn stover, and grass and the fallen or diseased trees removed by Forestry Departments from forests. If these feedstocks were left to decompose naturally a high percentage of their carbon content would be converted to carbon dioxide and released to the atmosphere. The conversion to Biochar locks the carbon in a stable form that will not react with oxygen to produce carbon dioxide.

The diagram below shows the basic method for pyrolysis. In the manufacturing, there is the ability to recycle the heat from the pyrolysis to power the machinery. In addition, the heat given off by pyrolysis can be distributed as electricity for consumer use. If the feedstock is too wet and the moisture content greater than optimal levels for pyrolysis the heat from the pyrolysis reaction can be diverted to dry the feedstock prior to entry into the reactor cell. Therefore, the manufacturing of Biochar has additional scientific merit to the stewardship of our environment and the positive application of Biochar on farmland for the retention of fertilizer. 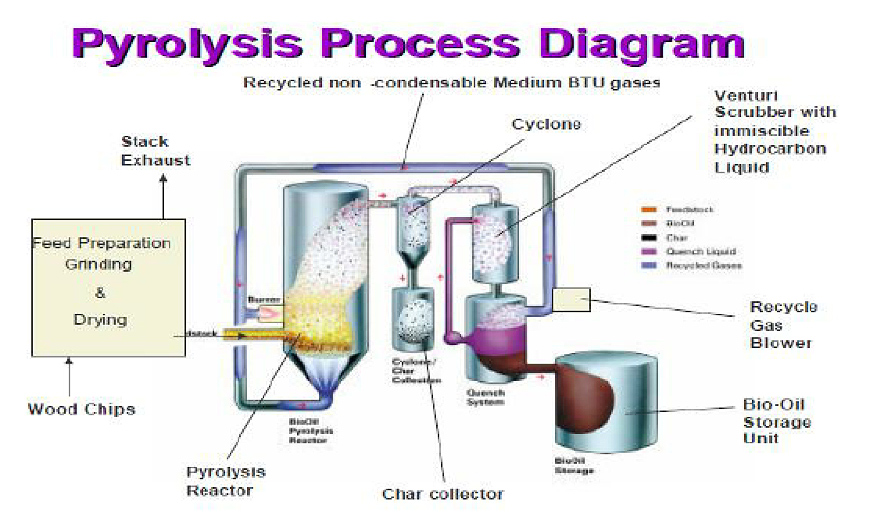 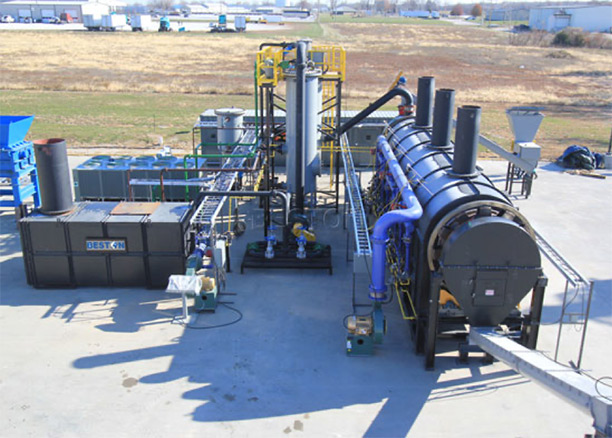 A basic method of Pyrolysis and a working Biochar plant utilising the Pyrolysis process.

What is the market for Biochar?

The longevity of Biochar, a carbon-based porous material, has proven to provide higher crop yields, improve soil health and retain nutrients in the soil and prevent their leaching into the groundwater. There are a number of benefits of Biochar that will provide a positive effect in preventing nitrogen and phosphorous components of fertilizer from leaching into tributaries and finding their way into the Gulf regions thus creating a dead zone from hypoxia (little to no oxygen in the water): 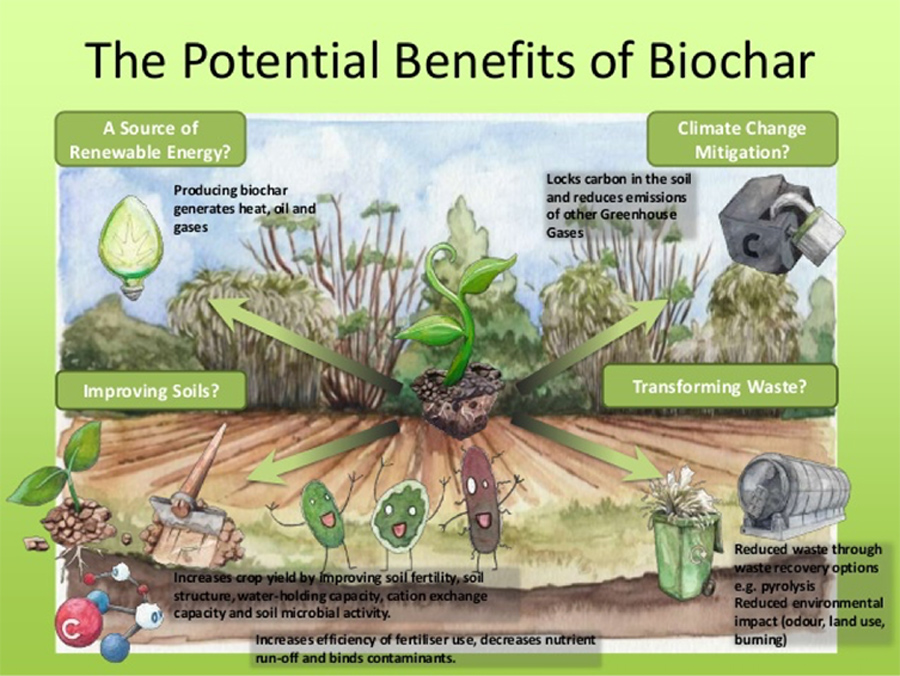 In summary, the scalability of using Biochar in farm fields to prevent nitrogen will improve soil health and increase crop yields on farmlands around the world. There will be a chain of events that are positive from the use of Biochar. First, farmers will use less water. Then they will react to soil testing by using less fertilizer. The crop yield increase will provide value added to their farms. This is a big idea which already has scalability in place.

As shown to the right evidence of comparing soils with Terra Preta and without, the ability for corn to grow is significantly better with the dark soil. Biochar is equal to Terra Preta with the same benefits to the land. 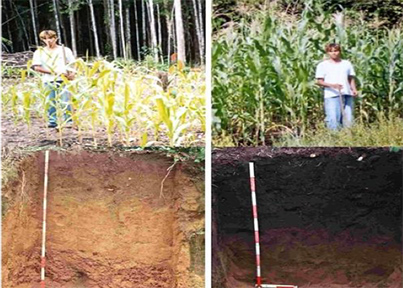 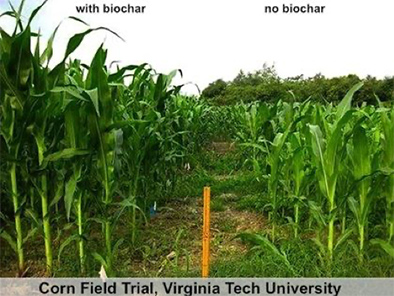 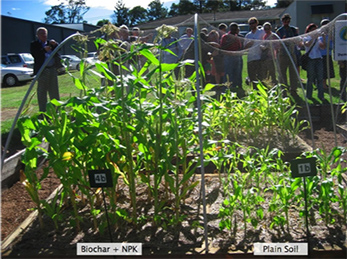 One of the 5000+ coal fired power stations emitting greenhouse gases that are operating worldwide today.

During the 2015 United Nations Climate Change Conference in Paris, over 180 nations set an aspirational goal of limiting global temperature increase to 1.5°C compared to pre-industrial levels. In order to meet this goal, the Intergovernmental Panel on Climate Change has reported the deployment of large scale “carbon-negative” cycles are needed by 2040.

One type of carbon-negative technology that has generated significant interest is biomass energy production combined with carbon capture and storage (CCS), known as BioCCS or BECCS. BioCCS has enormous potential to remove significant amounts of the greenhouse gas (GHG) carbon dioxide (CO₂) from the atmosphere while producing renewable fuels and/or electricity.

HOW IT WORKS: CES Carbon Negative Energy (CNE) plants use waste biomass fuels that are gasified to produce a synthesis gas. This “syngas” is then used to produce renewable natural gas (RNG), hydrogen (RH₂), and/or electricity with full carbon capture using CES proprietary oxy-combustion technology. By using fuel that consumes carbon over its lifetime (biomass) and safely and permanently storing all produce carbon dioxide (CO₂), the process results in net-negative carbon emissions, effectively removing harmful greenhouse cases from the atmosphere. 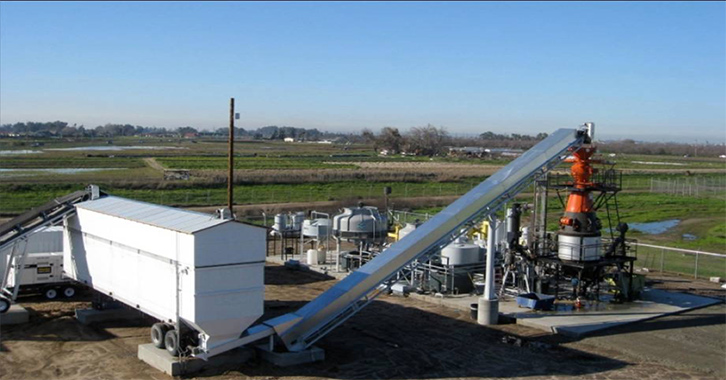 The iron and steel sectors are under immense pressure to reduce their carbon footprint, energy consumption, and greenhouse gas emissions. With nearly 70% of the energy consumed produced from coal-based thermal power stations, this sector accounts for ~ 5%–7% of global CO2 emissions. the utilization of sustainable biomass-based chars/charcoals to partially replace fossil-based coals and metallurgical coke in various iron and steelmaking operations is a realistic viable opportunity for the industry. Key factors for producing metallurgical coke with Biochars include fluidity, expansion/contraction of coal–Biochar blend, particle size, CO2 reactivity of Biochars, and the strength of biocokes produced. During blast furnace ironmaking, partial substitution with Biochars can be used for sintering iron ore, carbon composite agglomerates, and as an auxiliary fuel injectant. Biochars also find application as charge carbon and slag foaming agent in electric arc furnace steelmaking. While some of these technologies are still under development, pilot-scale testing and industrial- and commercial-level trials are also under way in some cases.

The iron and steel sector are under immense pressure to reduce its carbon footprint.

As the knowledge and awareness of the key benefits of Biochar become apparent, there will be a raft of extended opportunities and applications for the product worldwide.

Our Biochar from import is not made from waste or residues, it is made entirely from 100% purpose grown, virgin plantation grown eucalyptus trees. This ensures no contaminants unlike the case if residue or waste materials are used as feedstock for the pyrolysis process. This ensures ongoing availability of a quality product with the same consistency while avoiding the possibility of emissions from unknown contaminants on re-used biomass. Future manufacturing would be from wood debris in forests.

Whether used in agriculture or used as a fossil fuel replacement using our Biochar typically brings eligibility for additional carbon credit revenue.

Biochar as a soil amendment is directly cost competitive with most chemical fertilisers.

Biochar as an industrial carbon source is directly cost competitive or cheaper than existing alternatives such as rubber carbon in EAF steelmaking processes.

Biochar as a fossil fuel replacement is cost competitive under full cycle comparison. For example, coal is cheaper per Tonne than Biochar, however Biochar typically brings increased efficiencies over coal and typically is financially better for industry than coal when compared under full financial analysis rather than only on a simple coast per Tonne basis.