The Company wishes to confirm that it completed and settled a US$20 million bond issue with a North American securities house underwritten by an Asian investment bank.

These cash funds were specifically used to acquire 3,478,260 Sub-Class Mali1 shares on the Sagabari resources project in Mali. Incept is one of 5 partners in the project which has now undergone an investment of approximately US$116 million with the balance of US$350 million to be invested by the partners and equity/debt injection from an investment bank. Revenues are expected with 18 month with the offtake of the resources being taken from global trading companies or Asian State-owned companies. The infrastructure for export is already in place.

The long term offtake agreement for the iron ore was secured in 2013 at well above present iron ore prices. The production costs are well below that of developed countries consistent with Incept’s strategy to look for resource developments in developing countries.

The resource development will be extended to bauxite and gold on the same concession.

The other partners comprise one of the largest listed global steel and resources companies, a global listed oil, steel, infrastructure and power company focused on Africa, Middle East and India, an international family office and an international financial partner in Asia. For future expansion two of the partners are major producers and buyers of commodities to facilitate the sale of the product. These major partners which are diversified and listed provides Incept the opportunity to progress its wish to become the trading entity for projects such as Mali and other projects which may arise with the same consortium.

The following statement of resources:

The Sagabari project consists of one exploration concession, known in Mali as a Research Permit, (1,741 km 2), located in the south western part of Mali, approximately 220km west of the capital Bamako.

Access to the project area is via sealed National Road R13 from Bamako to Kita and regional road (unsealed) from Kita to Sagabari, a total distance of around 256km. The Sagabari concession is located approximately 75km from Kita, the main regional center. Local access within the concession is by poorly maintained roads and some areas are inaccessible by vehicle during and immediately after the main rainy season.

The Manantali hydro-electrical dam is the largest in Mali. It is located on the Bafing River approximately 100 km north from the concession. It should be noted that this dam was originally planned to supply energy for an iron and/or aluminum plant. It is understood that electricity is currently sold to neighboring countries and little excess is currently available at the current production and supply intensities for further domestic or industrial use. A related company to the consortium partners has a signed concession from the Ministry of Energy to provide 250MW of renewable energy to the cities of Fana, Segou, Kita, Kati, and Kayes. The provision of adequate power to either the proposed Iron Ore or Bauxite mines is not considered to be a significant issue.

Incept has a carbon credit offtake agreement in Negros, Phillipines with the same entity who will develop the 250MW renewable energy element of the Mali project and intends a similar arrangement in Mali.

Previous mineral resource estimations were completed on the iron ore prospects in 1967 (SONAREM) and 1980 (BRGM). The 1980 estimation utilized a proportioned polygonal method confined within mapped outcrop to which a bulk density and grade were applied. The estimation produced a total resource of 114.4 million tonnes of greater than 35% Fe for all the areas tested in the 1980 campaign and 72 million tonnes of greater than 35%Fe for the Balé Deposit area.

Estimated Iron Ore Mineral Resources, as at 18 January 2015, total 139 Mt @ 47% Fe using a 30 % Fe cut-off for four combined drilled areas of the Balé deposit. The resources are classified as Inferred Resources in accordance with the JORC Code 2012.

In addition to these resources, the Sagabari project contains areas with Exploration Target estimated to have a combined range of between 280 Mt and 550 Mt, at grades of around 36% to 49% Fe. The potential quantity and grade of the Exploration Target is conceptual in nature and there has been insufficient exploration to estimate Mineral resources for these areas. There is no guarantee that additional exploration will result in Mineral Resources being defined in these areas.

Bauxite mineralization occurs along relatively flat plateaus underlain by deeply weathered Jurassic mafic intrusions or Neoproterozoic sediments. Drilling of the Sitaouma and Koubaya deposits was completed by SAREPA-Pechiney during 1959-60 and by a Chinese consortium during 1972-73. Details of these programs are sketchy with much data missing.

Estimated Bauxite Mineral Resources, as at 18 January 2015, for the combined Sitaouma-Koubaya deposits are 170 Mt @ 41% Al2O3 using a 35% Al2O3 cut-off. The resources are classified as Inferred Resources in accordance with the JORC Code 2012.

In addition to these resources, the Sagabari project contains areas with Exploration Target estimated to range between 300 Mt and 600 Mt, at grades of around 40% to 50% Al2O3. The potential quantity and grade of the Exploration Target is conceptual in nature and there has been insufficient exploration to estimate Mineral resources for these areas. There is no guarantee that additional exploration will result in Mineral Resources being defined in these areas.

The consortium also has the exclusive mandate from the Mali Government to obtain financing and undertake studies for the construction of a railway through the Sagabari concession. The railway will be able to transport bulk commodities, for all other mining company commodities in the area to a port in Senegal. Upon completion of the railway, the value of the assets will be enhanced.

Status Listing of Incept:
The prospectus for a future IPO is intended to be fully underwritten with the intended share price being the previous trading price of the assets corrected for the recent consolidation of shares.

The IPO may take place after the intended compliance listing which is presently in process or at the same time.

The Indicative equity valuation of assets was conducted by a Top 6 accounting member firm in 2013 and will be updated by European research analyst (Research Report) based on recent acquisitions and the 6 pillar strategy for the business (www.inceptholdings.com) as discussed in previous newsletters.

If the higher end of the expected Research Report valuation is used, the underwriting size will require the issuance of approximately 300 million shares to induct the funds. The underwriting limits will allow all of Incept’s projects to be commercialised and globalised into profit as well as allowing funds for significant acquisitions. The draft Research Report is expected around 22nd April 2016.

The likely top global investment bank to manage the IPO process based on the assets of the company on the basis of a fully underwritten prospectus has not changed since 2013.

The significant capital required by Tectron and MobiOne Global to globalize can be provided through these funding provisions.

Status of other resources projects:

Incept expects to use similar private bond issues to develop into production its target resource assets in Cambodia (gold), Nigeria (coal), West Africa (copper) and the Phillipines (iron sands) since the capital requirements are not significant such as Mali. This is a closed loop financing strategy not dependent on the listed equity markets to put resource projects into revenue. 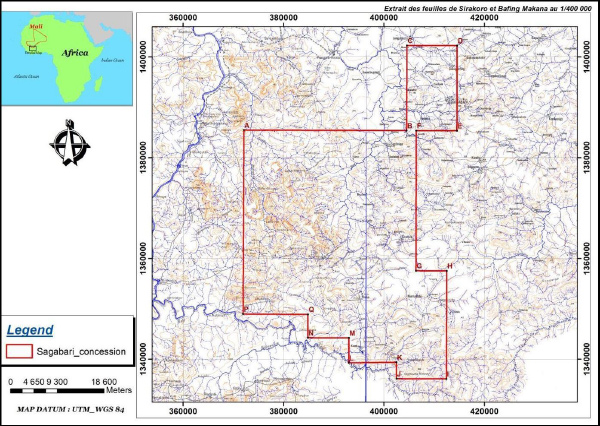